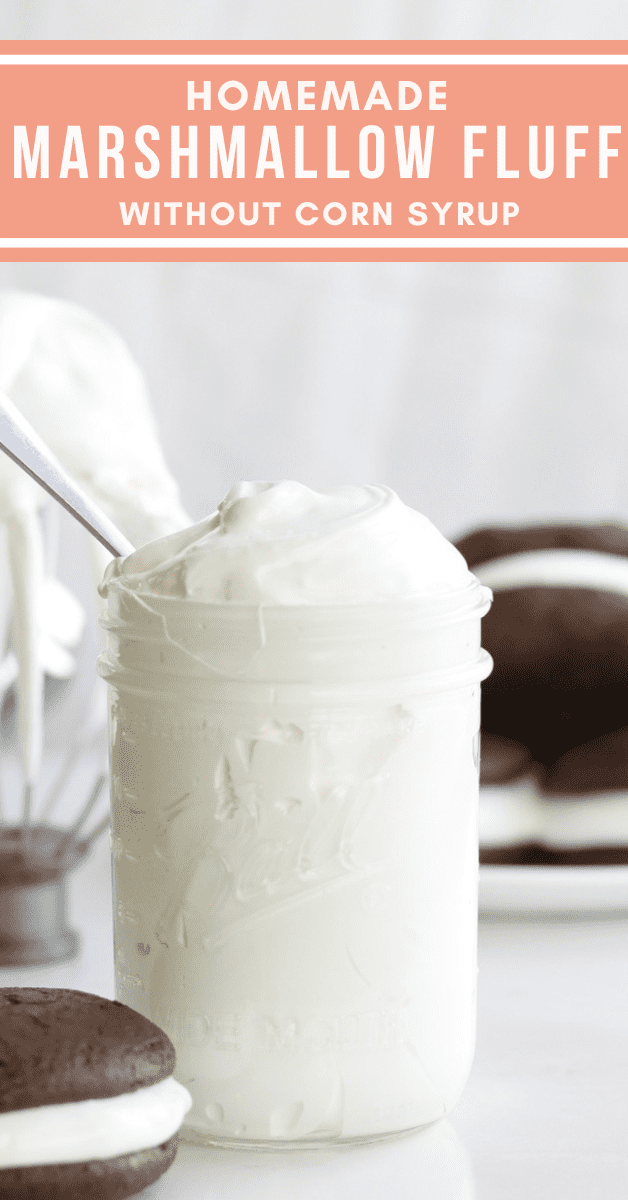 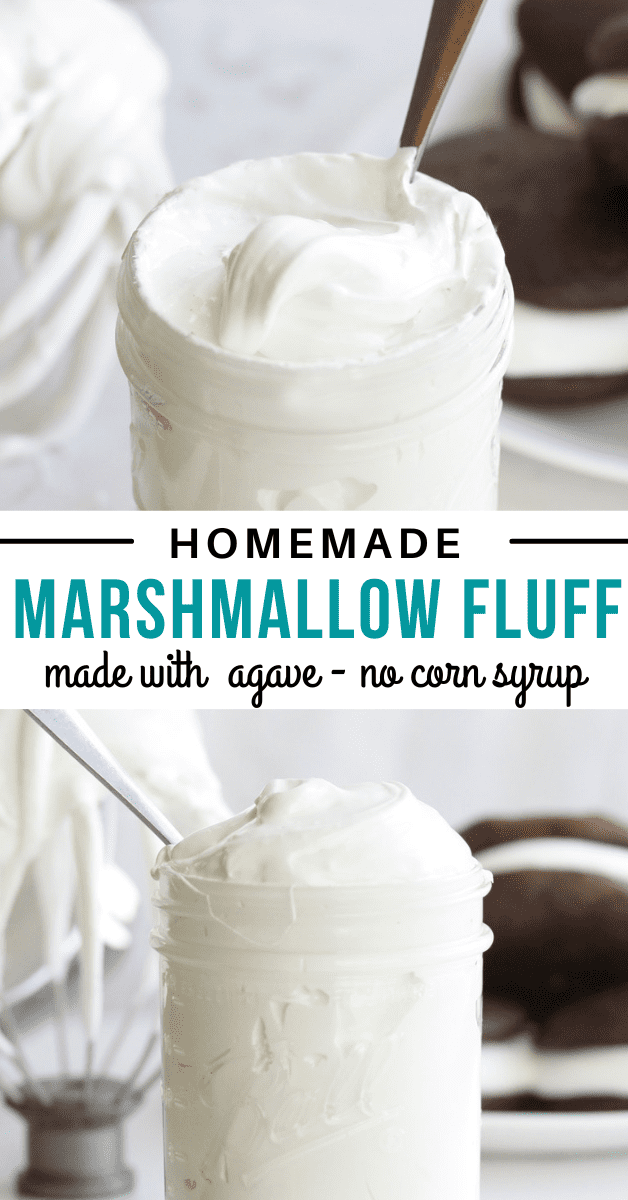 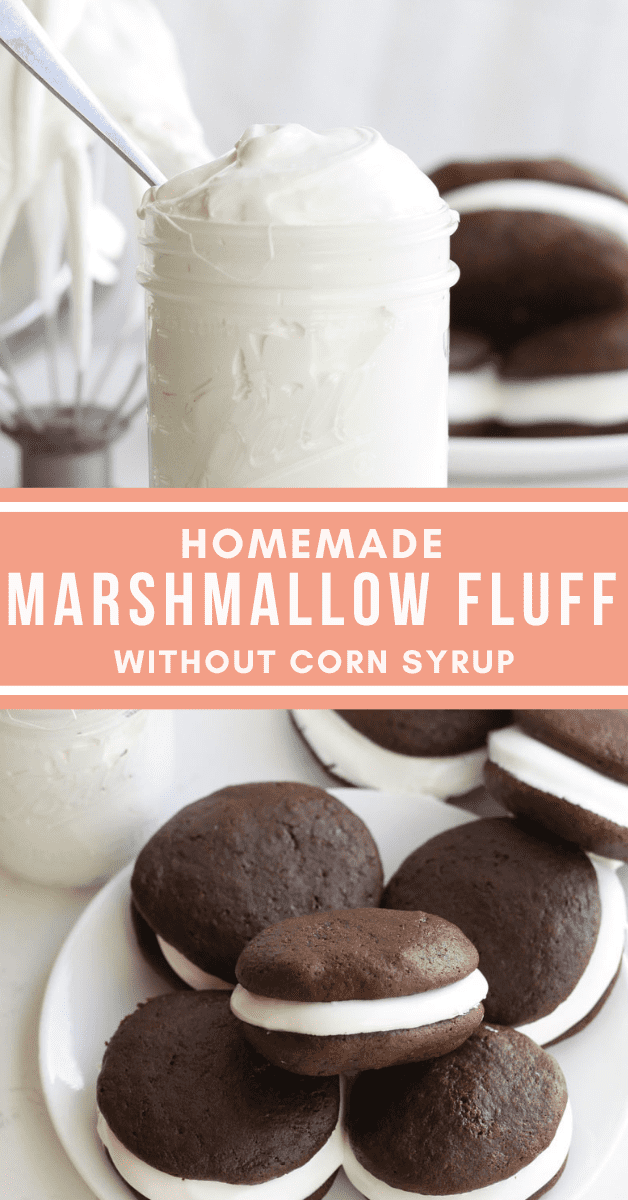 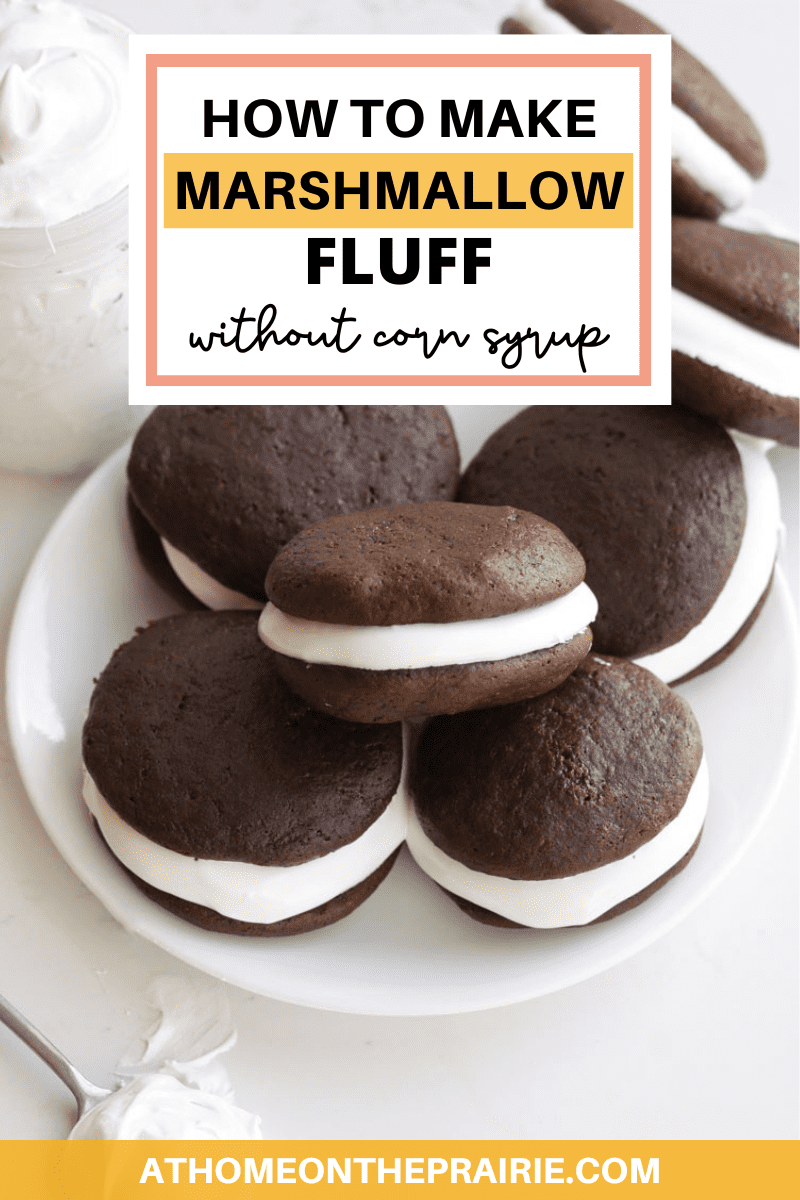 Making marshmallow fluff without corn syrup is the way to go if you want to skip all of the extra ingredients in the store-bought version. It’s delicious, fluffy and works perfectly in any recipes that call for a jar of marshmallow creme.

If you’ve ever been afraid to try making marshmallows or marshmallow fluff from scratch, you don’t know what you’re missing out on!

Sure there are a lot of steps and there’s a candy thermometer involved. But once you get the hang of the process, you’ll see it’s a really pretty simple recipe!

And the good news about making marshmallow fluff is, it takes a lot less time than it does to make actual marshmallows! You’re basically heating the sugar mixture to a certain temperature and then whipping it till it’s wonderfully fluffy.

Marshmallow fluff doesn’t require any drying time like traditional marshmallows do. Once it’s whipped, it’s ready to enjoy in any recipe that calls for the jarred version!

My favorite ways to use marshmallow cream are in homemade whoopie pies or in homemade fudge! You get that fun marshmallow texture without having to add corn syrup to your recipes. What’s not to love?

This post contains affiliate links, which means I make a small commission at no extra cost to you. Get my full disclosure here.

If you’ve never been a marshmallow fan in the past, be ready to change your mind. Homemade marshmallow fluff is light and fluffy, perfectly sweet and flavorful. It melts in your mouth and leaves you with a real vanilla bean flavor and a hint of salt.

Store-bought jarred marshmallow fluff is made with a laundry list of ingredients. The main one being high fructose corn syrup. This recipe calls for sugar, agave syrup, grass-fed gelatin and real vanilla extract. While it’s not really a “healthy food”, it’s much better for you than the premade stuff!

The instructions might look complicated, but the basic process is to boil the sugar mixture to the “soft ball stage”, then whip it in a mixer with gelatin until it’s light and fluffy.

That’s it! Not as hard as you might be thinking!

ready to use right away

Marshmallow fluff is ready to use immediately after it’s whipped.

What You Need To Make marshmallow fluff without corn syrup

FAQ About this marshmallow fluff recipe without corn syrup

what is marshmallow fluff?

Marshmallow creme has the same flavor as traditional marshmallows but it’s not stiff and springy. Marshmallow fluff is whipped and sticky, with a spreadable consistency.

what can you replace corn syrup with in marshmallows?

Corn syrup is the most common main ingredient in marshmallows ( both store-bought and homemade). But it’s easy to replace with healthier options. Agave syrup is my favorite substitute for corn syrup because it doesn’t have a strong overpowering flavor.

Honey and pure maple syrup can work in marshmallow recipes too, but their flavors will be more noticeable.

If you want to make marshmallows without any refined sugar at all, try my healthy honey marshmallow recipe.

how to use marshmallow fluff?

There are so many delicious ways to use marshmallow fluff (aside from eating it straight out of the bowl):

How To Make marshmallow fluff without corn syrup

Boil – In a medium pot, bring the sugar, agave syrup and 1/4 cup of water to a boil over medium-high heat. Once the mixture has boiled, reduce the heat to medium.

Cover the pot and continue to cook over medium heat fore 3 minutes to make sure the sugar dissolves and there aren’t any granules left.

Continue to Heat – Using a candy thermometer, let the sugar and water continue to cook until it has reached 112-115 degrees (soft ball stage).

Prepare Gelatin – While the mixture is heating, add the remaining 1/4 cup of room temperature water and gelatin to the bowl of a stand mixer (or hand mixer). Stir to combine and let the gelatin “bloom.”

Add to Mixer – Once the sugar syrup has reached 112-115 degrees, remove it form the heat. With the mixer on low, pour the hot sugar mixture into the bowl of the stand mixer, making sure to pour it down the side of the bowl so as not to scorch the gelatin.

Beat – Turn the mixer to medium high speed and beat the mixture for 5 minutes.

Add the salt and vanilla extract and beat on high speed for another 5 minutes or until the mixture is bright white and soft peaks have formed.

Finish – Using a spatula that has been rubbed down with coconut or butter, quickly scoop the marshmallow fluff into a jar or bowl.

To Serve – Use as a frosting for desserts, or in any recipes that call for store-bought marshmallow fluff. This recipe is delicious as a filling for homemade whoopie pies!

To Store – Homemade marshmallow fluff is best enjoyed right away but leftovers can be stored in an airtight container in the fridge for up to one month.

Substitutions – Honey can be used instead of agave syrup. The recipe will have hints of honey flavor though.

More marshmallow recipes On The Blog:

If you liked this recipe, I think you’ll really enjoy these other homemade marshmallow recipes on the blog!

I hope you love this recipe for marshmallow fluff without corn syrup! If you make it, I’d love for you to come back and leave a comment and rating so that I know how you like it!

Pin these steps to try later. Tag @athomeontheprairie on Instagram to share what you’ve made with us!

To Serve - Use as a frosting for desserts, or in any recipes that call for store-bought marshmallow fluff. This recipe is delicious as a filling for homemade whoopie pies!

To Store - Homemade marshmallow fluff is best enjoyed right away but leftovers can be stored in an airtight container in the fridge for up to one month.

Substitutions - Honey can be used instead of agave syrup. The recipe will have hints of honey flavor though. 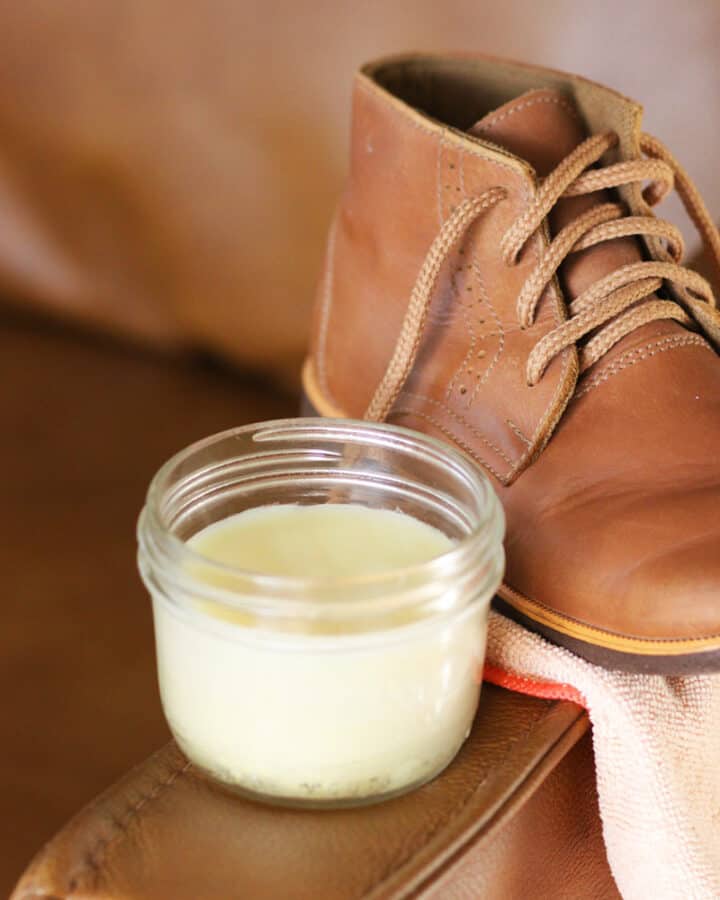 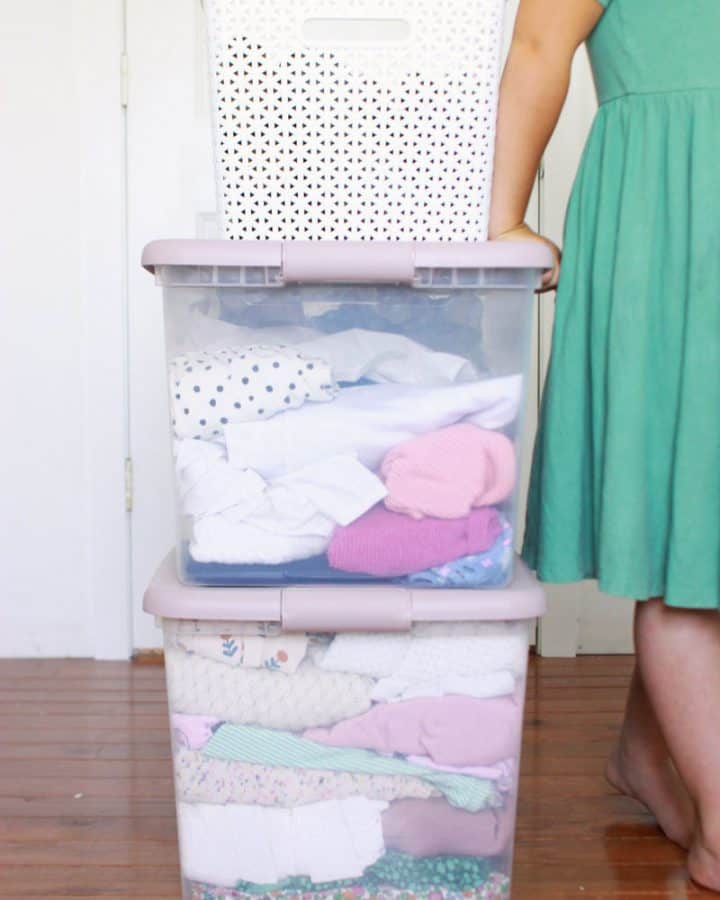 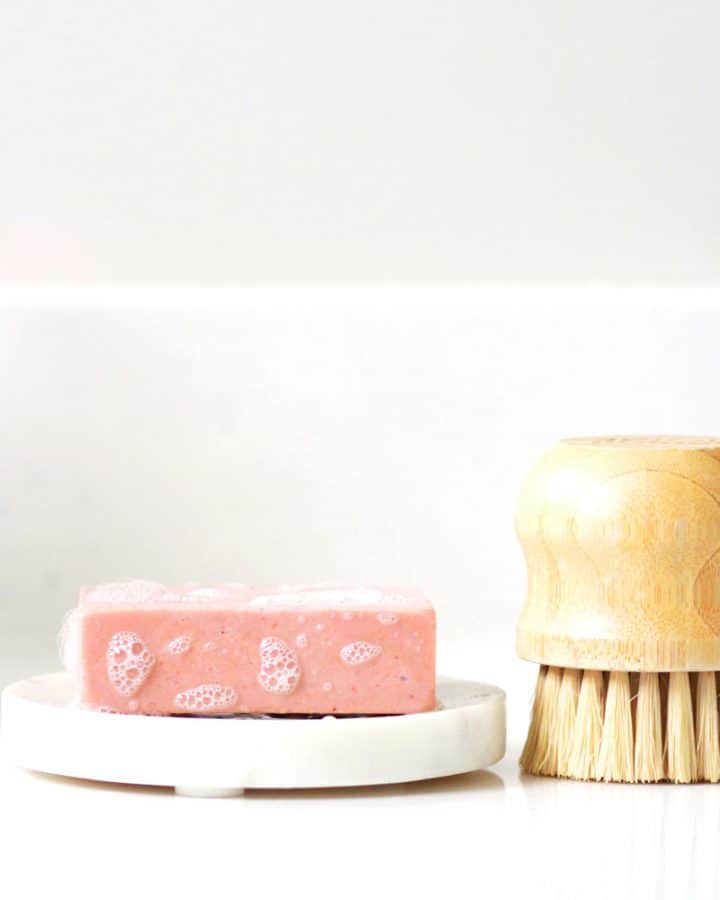 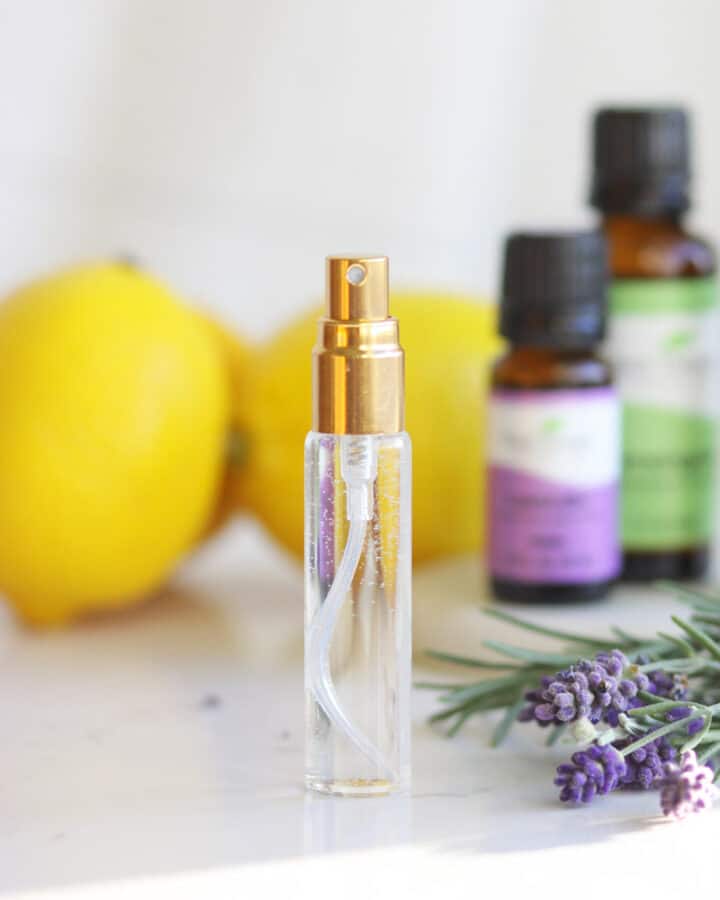 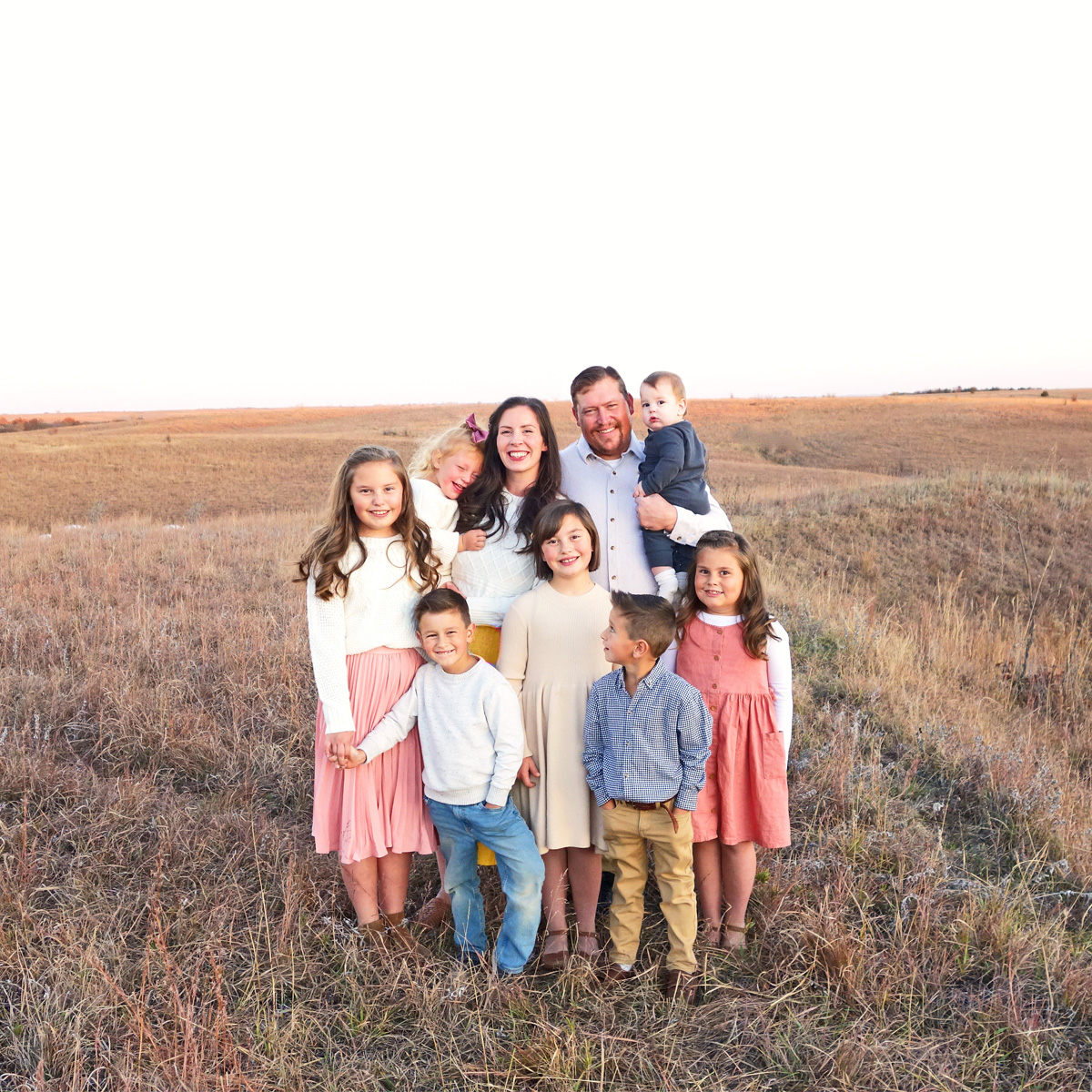 Check Out My Homemaking Planner! 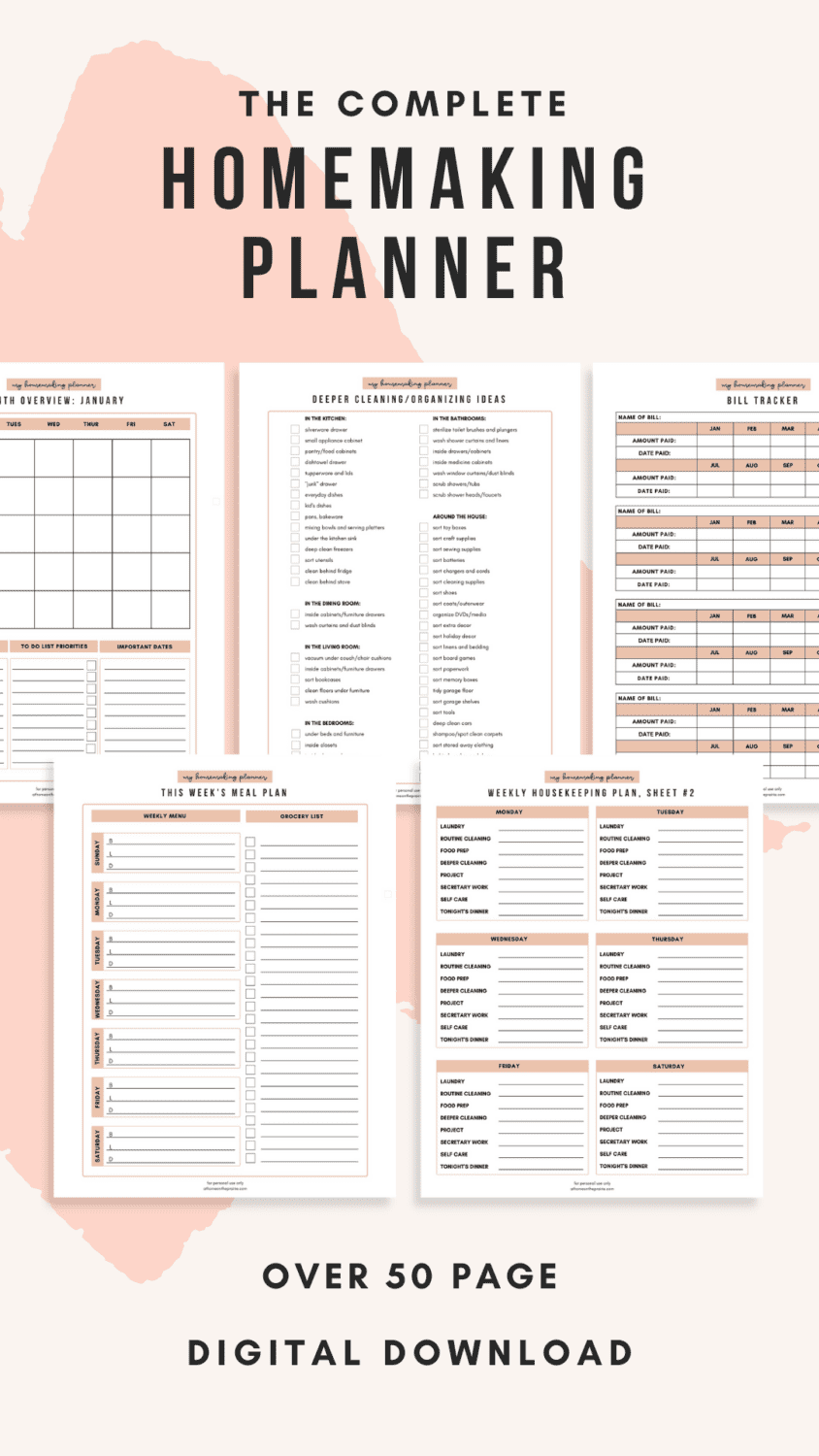 AS AN AMAZON ASSOCIATE I EARN FROM QUALIFYING PURCHASES.